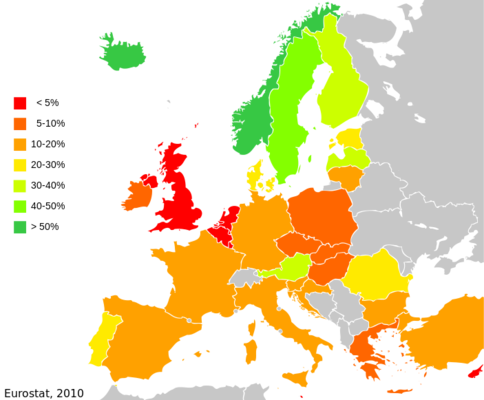 Renewable energy in the EU, candidates and Norway as proportion of total energy consumption in 2010.
Quelle:
Eurostat 2010

The European Parliament has passed a resolution proposal yesterday (Wednesday February 5th), which demands a more ambitious target-setting for the climate and energy policy until 2030.

The EU has committed to the well-known 3-times-20 targets until 2020: 20 percent renewable energy in the energy mix, 20 percent more energy efficiency and a 20 percent reduction in greenhouse gas emissions, as compared with 1990. Currently, the Commission, the European Parliament and the EU-Council are discussing the future targets for 2030.

The Commission has issued a proposal for the climate and energy policy until 2030 with 2 main targets: greenhouse gas emissions should be reduced by 40 percent (as compared to 1990) and renewables should make up 27 percent of the EU's energy mix.

The report of the European Parliament about the climate and energy policy, which was adopted yesterday, demands a more ambitious target-setting until 2030. Besides the 40 percent reduction in greenhouse gas emissions proposed by the Commission, it calls for a 30 percent share of renewables in the energy mix and 40 percent more energy efficiency compared to 1990. Rapporteur was the Christian-Democrat Anne Delvaux.

On Tuesday, the Green group even pledged for climate targets that were considerably higher than the targets of the Parliament's resolution. Shortly after the result of the vote in the European Parliament, we spoke with the Dutch MEP Bas Eickhout from the Green group.

US Militär emittiert jährlich mehr Treibhausgase als Schweden oder Portugal
Bio-food: Is that what you think?
"The demonstrations will only be getting bigger"
Not having a gouvernment at the time is better than having Rusnok and his friends - Advanced reelection in Czech Republik
Interview With EFJ Präsident Morgens Blicher Bjerregård The