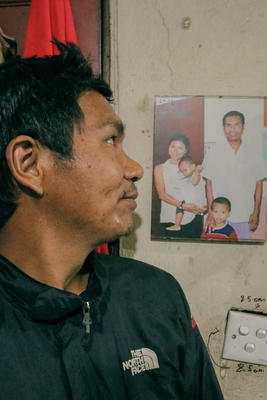 Katmandu is the city of many stories. It's colourfull and very lively. Every corner has its own story to tell whoever comes to the city. But the following stories are UNseen. Even most of the Katmandu people don't know there is a Refugee community living in Katmandu. The Refugee topic got attention in the media very recently.  When Rohingyas escaped to Katmandu.

My Name is Thannai. I am from Myanmar. But in Nepal, I have chosen the name Roshan. I came to Nepal in 1989. It's almost 30 years now. I was part of our historical uprising in 1988.  Our demand was  Democracy and  Freedom for the People of Myanmar. As a result of being part of the uprising, I had to flee from my country. Now I am 60 years old. I spent the Golden time of my life as a refugee. Until now I am waiting for my new life. Every day I am still going to bed with the hope that tomorrow I will receive a call from UNHCR: "Roshan, Get ready to start your life"

Roshan is one of many Myanmar Refugee living in Katmandu, under the protection of UNHCR.  More than 600 people are having urban refugee status under its mandate. Most of them are Rohingya and also some who fled from Pakistan, Sri Lanka, Afganistan Somalia and also a few from Iran.

Urban Refugees are living a very hard life in the Nepalese capital Katmandu. Even though UNHCR accept them, Nepalese government is considering urban refugees as illegal migrants. This is the reason for many serious issues. Until 2016 UNHCR was providing some financial assistance for Refugees. But early in 2016 they completely stopped that support. This makes their life in the valley much harder.  To survive most of the refugees have to work in illegally. They have been demanding working permission for a long time. But UNHCR keeps saying the government of Nepal does not want to give legal working permits for refugees. The illegal working condition leaves refugees highly exposed to labour exploitation.

Jaafer Ali, who escaped from Myanmar to Nepal with his family in 2014worked for a building contractor. He was promised to be paid at the end of the project. But the contractor didn‘t keep his promise. After the project, this man disappeared without paying a single salary.

"We have worked for him for a year. He keeps telling at the end of the project he will pay all the money. We can't demand because we are working illegally here. If he informed the Police or other authorities it would create problems for us. In the end, without paying anything he just disappeared. We can't go to the police the only place we can go to is the UNHCR. But we already know their answer. They will just say we will try to find them. And of course, this is not going to happen. Officers in UNHCR- Katmandu is just using words." This is just one case of many refugees who are facing a similar situation of labour exploitations.

Nepal is economically passing a very hard time. Even Nepali people struggle to deal with the economic pressure for their daily survival here in Katmandu. This situation is hitting the refugees who live in Katmandu even harder. At the same time, refugees have constant pressure about so-called visa overstay charges. The fine for that is 5 dollars per day. Some refugee has arranged privet sponsors for a 3rd country resettlement. But they can't' resettle, because of so-called visa overstay charges.

" My family has a sponsor to resettle in Canda. For 6 months, we are asking theUNHCR to help us with our these visa charges. It is an unimaginable amount that we have to pay to the Nepalese Immigration authority to get our exit permit. The amount is several million in Nepal Rupees. Since 2012 I am living in Katmandu, Nepal. We were accepted as refugees after interviews done by the UNHCR Katmandu and according to its International mandate. We can't deal with government policy. We are asking UNHCR Katmandu to please take this serious but until now, we still have to wait. It's very hard."

"Also I just want to tell this story, too.  One of our community members died while living in Katmandu as a Refugee. Her last wish was to be buried in her home village. Even in this case UHHCR Katmandu and the Government of Nepal did not show any sensitivity. In the end, we didn‘t have any other option than paying a lot of money privately to send that body to her home village illegally. UNHCR only provide support to keep the body in a cold room. But What should we do? Keeping it in the cold room?

What kind of world are we living in? Where is our basic humanity?  Above all else, We are all human. Everybody deserves human dignity.

Kumar Suresh, a father of 3 kids, is struggling and worrying about how his children's education can continue.

"These days our children have support only until class 8. After that? When they ask me about their education as a father what can I answer? My political activism was the reason our whole family had to escape. But my children are now suffering twice as much. Their future is uncertain. We can't plan anything in our life. All decision are pending on somebody‘s else hand.

Chin refugees from Myanmar are facing a new situation in Kathmandu.  UNHCR is going to withdraw their refugee status in December 2019. They will be forced to return to Myanmar.

"Suddenly I got a letter from UNHCR Katmandu office which said my refugee status will terminate on the 30th of December 2019. They said it was a decision from Geneva. After 6 years living in Katmandu, this was very shocking news for me. It makes me very sick. In the last six year, I couldn't find a new future. Now it got worse. I can't go back. The reasons why I had to escape from Myanmar are still there. My name is still on the army‘s wanted list. How can I go back? How can I put the life of my two children in danger?

I was even asking a UNHCR officer: “Do you have a guarantee for my safety.?“ The answer was simple: “ If you face trouble you can come back again.“ I don't know if my question sounded funny to them. But it's about our life.

I don't know how they call this programme. But for me, it's forced deportation. Consciously putting our family in danger "

As Roshan mentioned people are living as urban refugee in Kathmandu all are waiting for call from UNHCR office “Get ready to start your life".

Krishan Rajapakshe is a photographer and a visual artist. Base in Berlin. raised and grow in  Sri Lanka.  Krishan started his career as a visual communicator. Before Berlin, he has worked in various media and Communication houses in different countries such as Malaysia, Nepal and Cambodia and as well as Sri Lanka. Krishan's works have been published in a different media channel. VOD- Cambodia, Mkini- Malaysia and Lanka News web, Vikalpa in Sri Lanka as well as RDL-Friburge in Germany. Also, he has been involved in a number of solo and collective Photography exhibitions. He was one of the invites of the  Kosmo's photography artist,  moderated talk by Grada Kolomba at Maxim Gorki Theater, Berlin.

Krishan's photography works are always connected to social-political realities in the society. In his images plays in between beauty and rawness.

"No-one is safe until we‘re all safe"
#SAY NO TO RACISM #RACISM KILLS
Several Deportation of Refugee and Migrants in 2022
"Refugees for Refugees" needs support!
Our Voice special International women's day